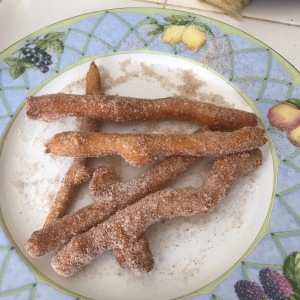 Inspired by a photo of my daughter at Disneyland eating a nice big churro, I wanted to make them at home.  It could not be that hard right?

I spent much of this week looking through old cooking magazines that I had in a box, looking for inspiration of new recipes to try, when I came across churros in the Feb/March 2016 edition of Cook’s Country. It did not look difficult to make.  They did not turn out an inch thick though, more like half and inch thick and some of them bubbled and looked like cacti by the time they were finished cooking, but they were delicious.  My hubby, who is not normally a fan of churros, really liked these, so I guess they are a winner.

The first time I made this, I forgot to add the sugar to the water – and as I was filling the piping bag with dough, I realized this… I threw out the dough and started over.  Churros are pretty easy to make. A few tips, don’t overfill the piping bags – I had a hard time piping it with a tip on, so I just removed the tip so they did not have the fancy ridges, but they were still quite delicious – and I would make them again.  The recipe said to refrigerate them before cooking, but I found that the ones that had come back to room temperature had fried up puffier and had a better texture, so I would skip that.  Also don’t use a candy thermometer that does not have high temperatures… I overheated the oil and my thermometer broke! So, don’t do that!

Makes 18 Churros (depending on thickness and length)

Line a rimmed baking sheet with parchment paper and spray liberally with a cooking spray.

In a medium pot, over medium-high heat, bring water, butter, salt, butter, and vanilla to a boil.  Turn off the burner and pull the pot off heat.  Add the 2 cups of flour and use a rubber spatula to combine the flour until there are no more white streaks of flour.  Transfer the dough to a stand mixer and beat on low for one to two minutes.  Add the eggs one at a time, mixing until it is combined before adding the second egg.  Increase speed to medium and beat for one minute.

Fill the piping bag with half of the batter and pipe 6 long logs on the  parchment lined pan, cutting the ends with kitchen scissors. Cook’s Country magazine had a step to refrigerate the dough for 15 minutes to an hour, but I think they fry up better when the dough is at room temperature.

Preheat 2 inches of oil in a heavy skillet to 375 to 400 degrees Fahrenheit.

Fry 3 to 6 at a time in the oil. You may need to use tongs to separate them as they fry so they don’t get stuck together.  Fry them about two to three minutes on each side before removing them to a paper towel lined plate to drain some of the fat off. Repeat with remaining churros.

In a glass pie dish or large shallow bowl, combine the half cup of sugar and 3/4 teaspoon of cinnamon.  Once the fried churros are cool enough to handle toss them in the cinnamon sugar and enjoy!

Growing up in Austria, I loved the fresh baked breads.  My absolute favorite was Mohnflesserl – a savory roll that had been braided and was topped with poppy seeds.  Recently I wanted to make my own at home.  I found a recipe in German and translated it into English.  Before I post the recipe, I have to share a funny story.  My mother would pronounce it Mohnfresserl – and growing up that is what I called it.  Upon my return to Austria in 2011, I landed at the airport in Linz, Austria and promptly ordered myself one, since my ride had not arrived yet.  I did not understand why the lady behind the counter was smirking.  Later I learned, I had been saying it wrong all my life – fressen means to eat like an animal would, flesserl is a braid; I laughed at myself (and my mother).  No wonder my web searches to find a recipe for Mohnfresserl gave me no results…

I realize my last blog post was in October of 2017 – life has been keeping me busy with homeschooling and a new passion for quilting. I still love to cook, so this year I hope to post a few more recipes than I did last year.

translated from German by Becky Pallmann

Place warm water, yeast and malted barley flour (available at Amazon – get diastic type- it adds sweetness and flavor to your bread- if you cannot find it, use sugar in its place).  Add flour, and salt to the yeast and knead until it becomes one ball of dough and pieces have pulled off the sides of the bowl. Cover with plastic wrap and a towel and allow to rise for 30 minutes.

Divide into 8 sections and roll each piece out into a snake. Form into a braided twist (https://christinawaitforit.wordpress.com/2016/06/17/mohnflesserl-flechten-rezept-und-anleitung/ has a great series of pictures that illustrate how to do this.)

Add a little water to the remaining egg white and beat. Brush your twists with egg wash and sprinkle them with poppy seed, kosher salt or other bread topping seeds you may have on hand.

Place a pan of hot water in the bottom of your oven for steam or spray the twists with a mist of water during the baking process.

I love these with a nice slab of butter while they are still warm.