I discovered Pinterest a few months ago and no one has seen or heard from me since.  One of the pins that I saw suggested placing grimy disgusting looking stove top burner grates in a bag with a 1/2 cup of ammonia overnight (outdoors to prevent fumes) and the dirt and grime is more easily cleaned… I have spent hours in the past trying to remove some of that crud from mine that I have very badly abused… and had given up on, to the point of almost buying replacement grates, as one year I allowed orange marmalade that I was making to boil over onto the burners and had left a scorched spot on my burner plate as well.  I tried this ammonia in a bag (a garbage bag will do the trick – I happened to have 2 gallon size zip-lock freezer bags that did the trick) and you don’t need to submerge them in ammonia it is the fumes that actually do the loosening up of grime.  I hesitate to post the before picture because.. well how could I let my burner grate get this bad?  I did have to use some steel wool to get the serious spots off, but that is because mine were so bad, – but if yours look that bad, there is hope! 🙂 (and I am not alone, but you don’t have to humiliate yourself publicly like I am doing! Hehe) The results speak for themselves: 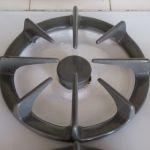